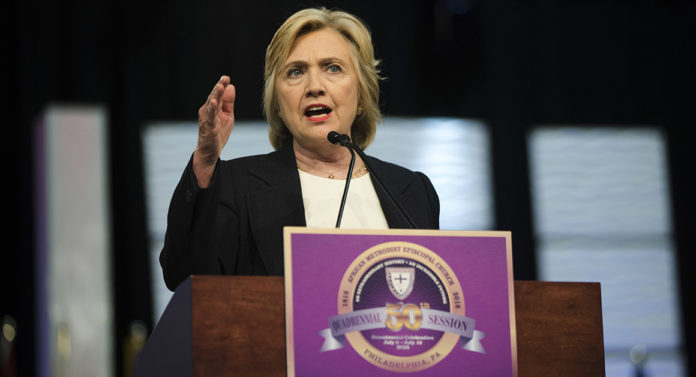 On Friday evening, Hillary Clinton spoke in Philadelphia, Pennsylvania at a celebration of the 200th anniversary of the African Methodist Episcopal Church. Clinton spoke about the events of the week: the police killing of Alton Sterling in Baton Rouge, Louisiana; the police shooting of Philando Castile in St. Paul, Minnesota; and the sniper attack in Dallas, Texas that killed five police officers and wounded several others. Clinton said that each of the killings were “senseless” and condemned violence saying, “We know there is something wrong in this country. There is too much violence, too much hate, too much senseless killing. Too many people dead who shouldn’t be.”

Clinton spoke about the racial divide that only seems to be growing saying, “As we know, there is clear evidence that African-Americans are much more likely to be killed in police incidents than any other group of Americans. And we know there is too little trust in too many places between police and the communities they are sworn to protect.” Clinton said that good law enforcement officers far outnumber those who are bad and a violent response to violence is not the answer. The protest in Dallas yesterday was peaceful and police were there to monitor the crowds and ensure the protesters’ safety when they were fired upon by a sniper. Clinton spoke about her proposal to invest $1 billion in police training across the county to ensure the safety of law enforcement officers as well as the general public.